Relapse and the Need for Permanent Fixed Retention

My practice  identified 100 adults who had all been treated by orthodontic specialists at least seven years earlier. Most of these adults were parents of children being brought in for treatment.

All the adults said they had received full maxillary and mandibular appliances, had been debonded with straight teeth and had been given lower removable retainers. We found that about half of them had been treated with extractions of premolars and/or third molars. They had been treated in many different areas of the United States and, presumably, with many different treatment philosophies. Not one of them knew where his or her retainer was located now.

We then asked these 100 patients if we could photograph their lower teeth. A cursory exam of each subject ensured that no additional teeth had been extracted. It took five years to accumulate all the photographs, a sampling of which is shown in Figure 1.

About 86% of the patients showed various degrees of crowding after having worn removable retainers. Nearly all of these expressed guilt for failing to wear their retainers as prescribed. (“My doctor told me to wear my retainers, and I didn’t—it’s all my fault!”) All expressed displeasure with their shifted teeth.

Many of the adults we photographed chose to be retreated. They were elated to find out that their teeth (and their children’s) could remain stable and attractive for a lifetime with fixed lingual retainers. As a result, we frequently see a parent and child seated side by side in the operatory for fixed appliance therapy. Some of these full-grown adults have even said, “You have no idea how happy my parents will be to see my teeth straight again!”

Bending and placement of a fixed mandibular 3-3 retainer can be delegated and completed in about 20 minutes (our normal adjustment appointment). The .028" Tensiloy* wire is heat treated for strength and long-term stability. The terminal ends are bent into small helices of about 1.5mm inner diameter and 3mm outer diameter. These helices are centered mesiodistally and occlusogingivally on the canines and completely encased in light-cured composite for bonding. In the past 10 years, we have begun flowing a small amount of composite between the wire and the incisors for better rotational control.

The patient is then appointed for a subsequent one-hour visit to have an .018" stainless steel maxillary 3-3 retainer bonded and labial appliances removed. We check the patient again after 12 weeks to ensure stability. In the rare event that a lower incisor rotates a degree or two, an invisible aligner is fabricated by our laboratory for repositioning. About one patient per month is seen for a fixed retainer repair. These patients are charged a nominal fee and are glad to protect their investment.

After we took the initial set of photographs of patients who had worn removable retainers, we began to photograph patients from our practice who had received mandibular 3-3 fixed lingual retainers at least seven years earlier. It took another seven years to acquire photographs of 100 patients, selected at random (Fig. 2).

After examining these records, and after 20 years of experience placing mandibular fixed retainers on more than 12,000 patients, our observations are:

The patients refer a relatively high percentage of their friends, family members, and co-workers. 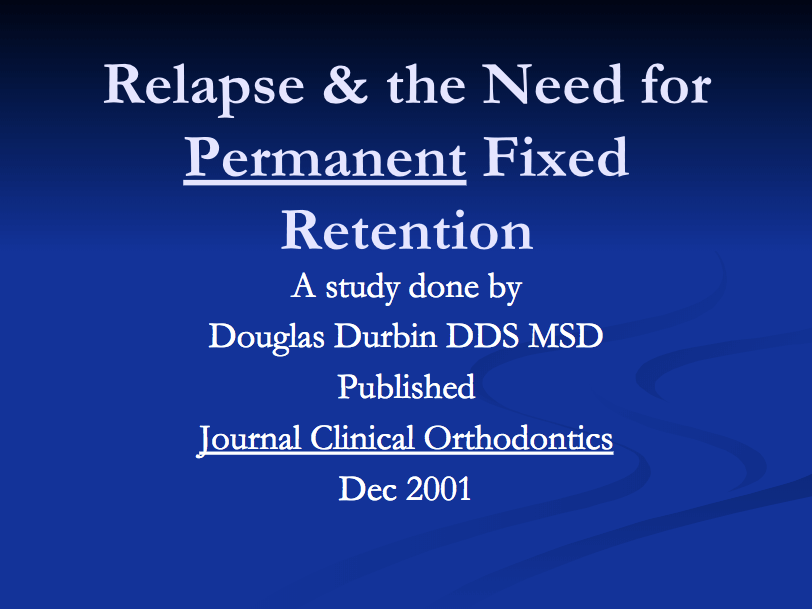 Many procedures that were once considered unconventional have been added to our practices over the years to improve the quality of patient care. It is time now to agree on the necessity of placing fixed lingual retainers for life to prevent relapse and thus bring our specialty to an even higher level.

The fundamental question is, ultimately, “Are our patients happy with their teeth?” Do you care? Your patients do!